I recently wrote about a three-day train journey from Kazakhstan to Russia. While getting there was half the fun, our border crossing adventures during the return leg, of course, continued.

In some countries, entry requires more than just a passport. Kazakhstan uses a migration card, an easily misplaced slip of paper, for entry and proof of address registration. The stamped paper must be returned when leaving. Visitors are rightly warned, “Don’t lose this!”

After our conference in Yaroslavl concluded, our party of four enjoyed a wonderful day exploring Moscow before heading back to Kazansky Railway Station for a midnight departure. The three-day train trip from Europe through the Ural Mountains and into the Central Asian steppe passed lazily, as we sipped hot tea from the samovar every half hour and hopped off for ice cream during brief halts.

In the city of Chelabinsk, we had time for a leg-stretching stroll. During our perfunctory ice cream queue-up, a man overheard my accented Russian. After asking the proverbial “Where from?” question, our traveling companion Svetlana answered, “America.” The man then challenged, “I don’t like your president!”

Over the years, there are two frequent questions I have learned to avoid – what is your salary and whom did you vote for? Because it was an election year, I contemplated a wisecrack like, “Just wait six months and we’ll have a new one!” However, Svetlana beat me to it, shouting “That’s YOUR problem!” and pulling me away.

Back on train number 84, we continued our eastbound return toward Kazakhstan. This time, the border crossing was easier, as we made sure to get a blank migration card and an entry stamp. In airports, they usually stamp it twice, indicating you are pre-registered for 90 days. With only a single stamp, however, it means you need to visit the immigration police within 72 hours to register.

Thankfully, we had a lawyer working with us, who kept up with the frequently-changing laws (“so they will always be current”) and got me the coveted second registration stamp upon arrival in Karaganda. 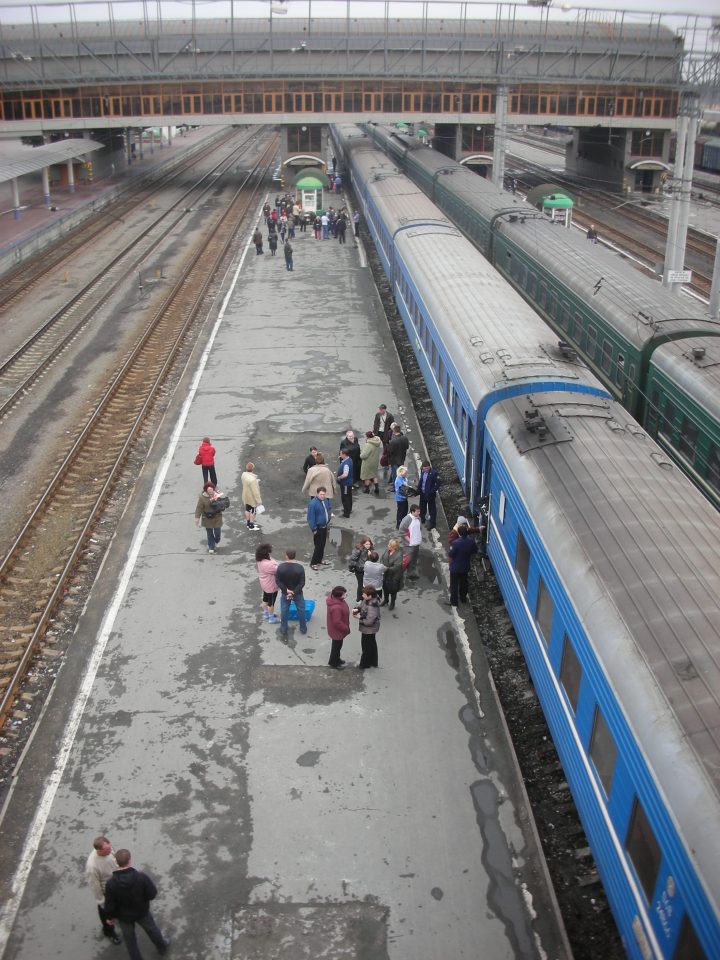 A Final Border to Cross

Prior to this long-distance journey, my wife had ordered a new passport from the embassy in Astana, which she picked up after our return. With another pending trip looming, we were told that her business visa, though still stuck in her old passport, would be valid for international travel if carried together with her new passport. She practiced and memorized a Russian-language explanation just in case.

Thankfully, when she showed her shiny new visa-less passport at the airport, the young officer glanced at it with wide eyes, slid it back and waved her through. I was not as lucky.

At my immigration window, the border guard found my passport and visa in order, but became puzzled at my migration card. We had contingencies in place for my wife, but not for me. Patience and silence, both necessary when crossing borders, are two gifts I have yet to develop. Knowing better than to ask if there was a problem, but unable to keep my mouth shut, our dialogue began:

“Is everything okay?” I asked, trying to appear hopeful.

“This migration stamp is very old,” she indicated.

“Two weeks ago? Where did you get it?”

“Train 84 from Moscow to Karaganda. That’s how I crossed the border.”

This must have been an uncommon way to get a migration stamp, at least for an American. I shrugged. She smiled. We both laughed and she wished me a good trip.

There was even enough time for another ice cream. Across the border.

3 thoughts on “Crossing Borders 2: From Russia with Love”