What do you call someone who only speaks one language?  An American!

One of the joys, or perhaps trials, of traveling and living internationally is the opportunity to make mistakes in speaking the local language. I have heard that learning a new language requires at least one million mistakes. If that is true, I most definitely have mastered Russian.

While living in Kazakhstan, I became quite skilled at spreading joy through my daily language blunders. Looking back now they are really quite funny. When locals saw me coming they likely smiled thinking something like, “Here comes free entertainment!”

The past tense form of the Russian word “to write” is pronounced “napisal” (написал), with special stress on the last syllable. However, by innocently accenting the second syllable, as Americans are prone to do, the same word actually means “peed” (yes, as in urinated). You can probably imagine the joy this could spread when used incorrectly.

While getting ready for our foster daughter’s birthday party, we had ordered a custom-made cake from a nearby bakery. Our other children were decorating the house and cooking homemade manti (stuffed steamed dumplings). As I outlined the plan for the day, the conversation naturally turned toward the cake. I explained that not only had we ordered a special cake, but we had even peed “Happy Birthday Nastya” on top of it! Crestfallen faces all around.  “Я не буду,” (None for me, thanks!) said Lena.

My best blunder, though, took place in an office where I worked as the director for a non-profit organization. Now, it is important to understand that in the local culture a director is always shown respect. No one ever laughs at the director, at least not to his or her face.

On this particular wet winter day, I needed a small plastic file folder called a “papka” (папка). Yet, I managed to mispronounce this simple word as “popka,” which refers to a person’s backside. To set the scene properly, the office manager, accountant and property manager are all seated at their desks in a large shared office space. The lawyer, formally dressed as always, is putting on her hat, gloves and overcoat when I enter to ask this question.

“Excuse me, please. Does anyone have a butt?”

“I need a butt – because it’s a very good place to put documents so they won’t get dirty or wet.”

The lawyer, looking stern as she buttons up her overcoat, stares seriously and says, “Douglas, you need a papka.”

In keeping with her professional demeanor, she avoids using the offending word and replies, “No, you did not.”

I finally realized my mistake and burst out laughing. Only then did the rest of the straight-faced staff crack up as well. Except for the lawyer, of course, who simply shook her head at my antics.

For my Russian-speaking friends, here is the actual dialogue (please forgive any additional mistakes in grammar or spelling!): 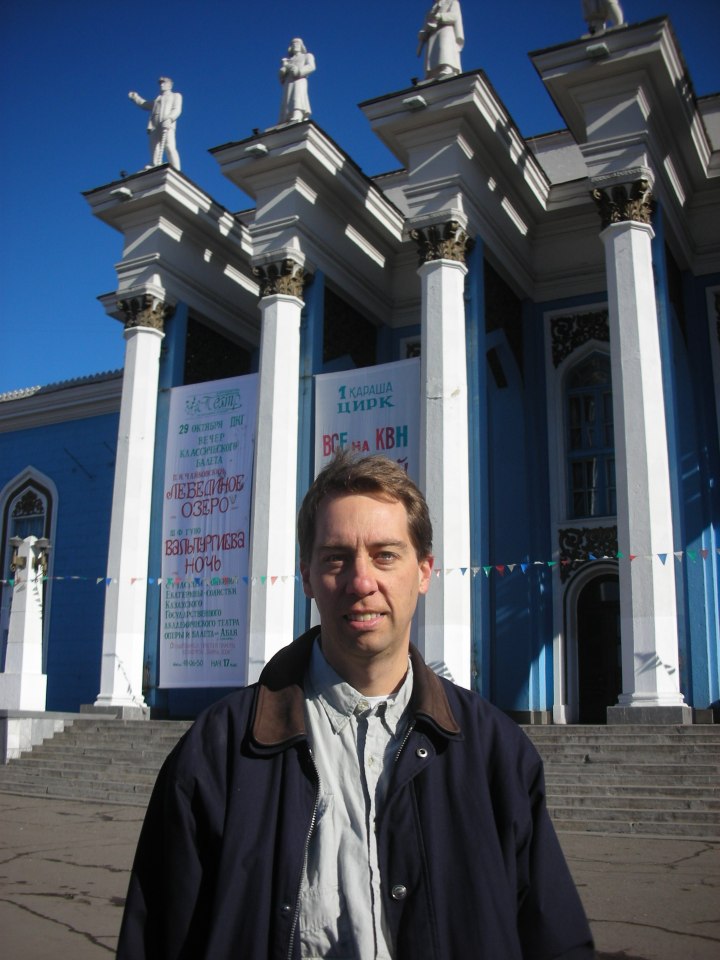 The joys of learning Russian in Karaganda, Kazakhstan